As I turn the pages of my diary to write this blog and go through the pictures of our travel, I am taken back in time. It’s a beautiful feeling that unconsciously brings a smile to my lips. I can feel the cold wind in Siena, taste the wine in Chianti, can wonder again at the amazement that I had felt on seeing the Cathedral at Siena and the surprise on coming face to face with the Leaning Tower of Pisa. Not so impressive, I thought(I am not sure what I had expected but I remember not feeling bowled over). It could be my ignorance of science but to me it had looked just a little tilted and inwardly I wondered why the world was ‘gaga’ over it. I am glad Galileo isn’t around to certify my ignorance.

Our journey by bus  started at 8:30 a.m. from the Florence Train Station. Our guide for the day, Olivia, a hungarian girl had come to Italy as a tourist but had fallen in love with the city and settled down (if you travel to Italy, it’s not surprising). The driver for the day was Sergeo. The drive to Siena is 1 hour and 10 minutes.

Olivia told us we would be following the river Arno, the main river in Florence  which goes from Florence to Pisa and ends up in the Mediterranean sea. The river was used by wool merchants initially. The bridge on the river Arno (Ponte Vokyo bridge) was used by the Medici family, a wealthy family of bankers who lived on one side of the river and worked on the other side. There is a wall around Florence with 14 gates built in the medieval period to protect it from invaders .

As we got off the bus at Siena outside it’s gates, the cold wind, bit through our jackets. Hugging our self we managed to make our way into Siena Olivia handed us over to a Sienese girl, Franchesca, the girl in the stylish yellow coat.  She wasn’t just chic, she was well-informed as well. Francesca told us how Florence and Siena had been enemies for a number of centuries. Siena is divided into 17 districts each represented by a particular animal. Our first stop was at the “Caterpillar” (Bruco) district which has the world’s oldest bank, Banca Monte dei Paschi  set up in 1472 – 544 years old!.

Siena is famous for “The Paleo”– a horse race held every year, between the residents of the 17 districts.  It’s held on July 2nd and August 16th each year and Siena becomes the busiest place in Italy on these 2 days. The participating horses are drawn by lots and they have to run three rounds around the square (Piazza del Campo). The winner gets the Paleo- a silk cloth. It’s a matter of prestige to the district which brings the Paleo home. 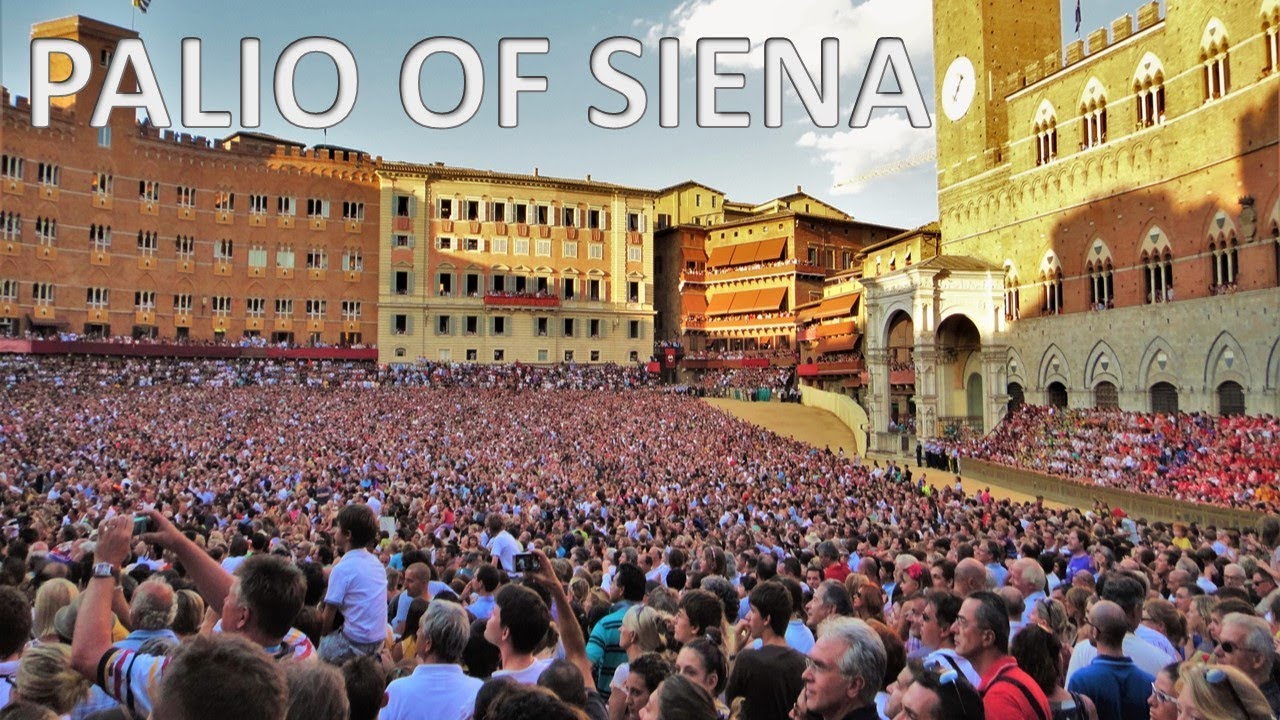 The only square in Siena, is in the shape of a sea-shell with a church in front of the square and a bell tower called the Mangé tower. There are cafes around the curve of the square. People just sit around basking in the sun on the square (which is what we did to get away from the cold winds). During the Paleo, the square is filled with 50,000 people ( which happens to also be the population of Siena)!

In this little town, is a cathedral of Santa Maria. Not any ordinary  Romanesque, Gothic cathedral-  a stunning, pompous and majestic one which is a marvel  compared to the spartan interior of Florence’s cathedral, in terms of it’s facade, green and white marble architecture, Venetian mosaic floors, marble busts of previous 171 popes on the rounded arches of the nave, stained glass windows depicting the Last Supper. The cathedral is an indication of the richness and prosperity of Siena at one point in time. There is a history attached to every inch of the cathedral that one can only imagine that it must be History student’s dream to visit it.

Interior of the Cathedral

Stained Glass window with the painting of the last supper

Our 3rd stop was San Gimignano- the city of towers. There were 72 of them but now there are just 14. The specialty of this place is the gelato (ice-cream). Gelateria Dondoli had won the Gelato World Champion in 2006/2007-2008/2009 and we got to take a picture with none other than Mr. Dondoli, himself. Our 2nd ice-cream in less than an hour!!!

San Gimignano, is a small pretty town surrounded by high walls (just like almost every town in Italy) with little houses, little shops, pretty flowers, a little well in the center of the square surrounded by feudal towers-houses and loads of gelatarias. Just couldn’t get enough of the stone lanes, little plants going through crevices on the stone walls, wild flowers,little potted plants on window sills and at door steps. Pretty, off-beat, Delightful- old world charm !

At the entrance to San Gimignano

The one main lane with all the little shops

The square with the tower in the background

Built at a height, you can see the countryside below

Our next stop was at Chianti, where we were to have our authentic Italian lunch .Our hosts were very kind and showed us the vineyards and explained the process of wine making; only everybody was more excited to jump to the next step and that was tasting the wine :).

The girls were super excited at the prospect of having to taste wine like adults (it was part of the package 😉 and were in for a sad shock when served orange juice :). Lunch was served with a lot of Italian love; bruschetta – warm,toasted breaded, drizzled with olive oil with cubes of tomato and basil leaves, cheese made of sheep’s milk, boiled vegetables and pasta with pommedoro (tomato sauce). We had opted for vegetarian lunch. The non-vegetarians had sea-food in place of vegetables. The high was the red wine, white wine and sweet wine. I am more of a white wine person but when you’re on holiday, I believe all flavors must be savored. Post lunch, the group was allowed to roam around the vineyards (a lot of empty poles because the grapes only grow in August-September). There were 250 hectares of green stretching as far as the eye can see-wheat cultivation, vegetables and grapes. They also had their own healthy and happy-looking cows and sheep – no wonder that cheese was so mouth-watering! After an scrumptious lunch, we were more than happy to sit around- Yippee! Three-quarters of an hour was break time! Couldn’t have imagined hopping back into the bus after that luxurious meal! Under the Tuscan sun, overlooking the vineyards, life couldn’t get better than that!

The last stop was Pisa- the land of Galileo Galleli. The leaning tower of Pisa looked like a tiered wedding cake which had tilted. In comparison to the Eiffle tower in Paris and Burj Khalifa in Dubai, it’s really small and not as imposing. An architectural plan gone awry, the tower sank 1 mm every year after 1183, after the third floor was constructed because the soil on which it was made was soft.The remaining floors were built later in a way to maintain the center of gravity. The climb to the top is child’s play and nothing compared to the climb to the top of the Duomo in Florence. I was thrilled. Couldn’t imagine being confined again in a winding staircase.

Piazza dei Miracoli (Field of Miracles) has iconic buildings – the Baptistry, the Cathedral (in which Galileo  saw the lantern moving based on which he arrived at the principle of the pendulum) and the Leaning tower, in the midst of green lawns…

The bell at the top of the tower

A view from the top

On the return journey, we took a little train back to our bus which was parked some distance away. The little train added the sweet touch to the end of a fulfilling day.  The entire tour takes a whole day but must not be missed if one wishes to experience all the sights and flavors of Italy. Your Italian holiday isn’t complete, if you have not gone on the Tuscany tour!

Just another reason to pack your bags and you’ll not be disappointed, I promise :).