“Cinque” meaning 5 and “Terra” meaning land- 5 lands is a tour of 5 villages nestled on the mountains alongside the Mediterranean sea , a treat for the eye, a hiker’s dream destination, an artist’s fantasy, a world away from the rest of the world, staggeringly beautiful and unpretentious. 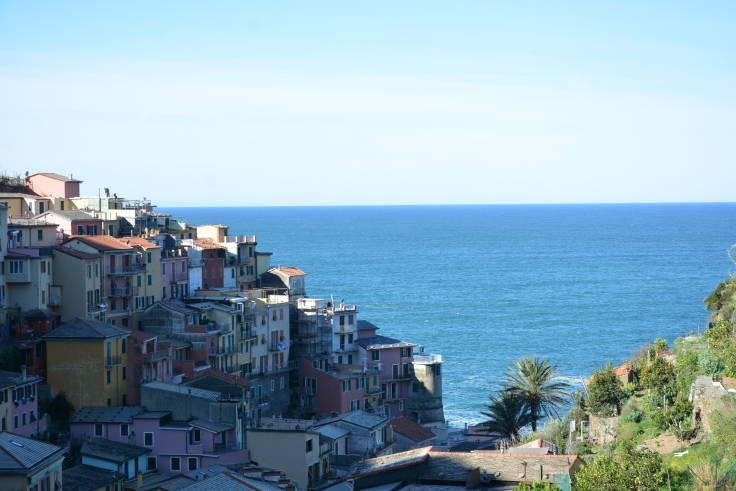 The village built on the mountain

In the Liguria region of Italy, set on steep cliffs along the coastline, connected by rail, the villages are a UNESCO world heritage site and rightly so. To protect the villages from being destroyed by the evils of development, motor vehicles are restricted and last year, the number of tourists allowed to these villages has also been controlled. 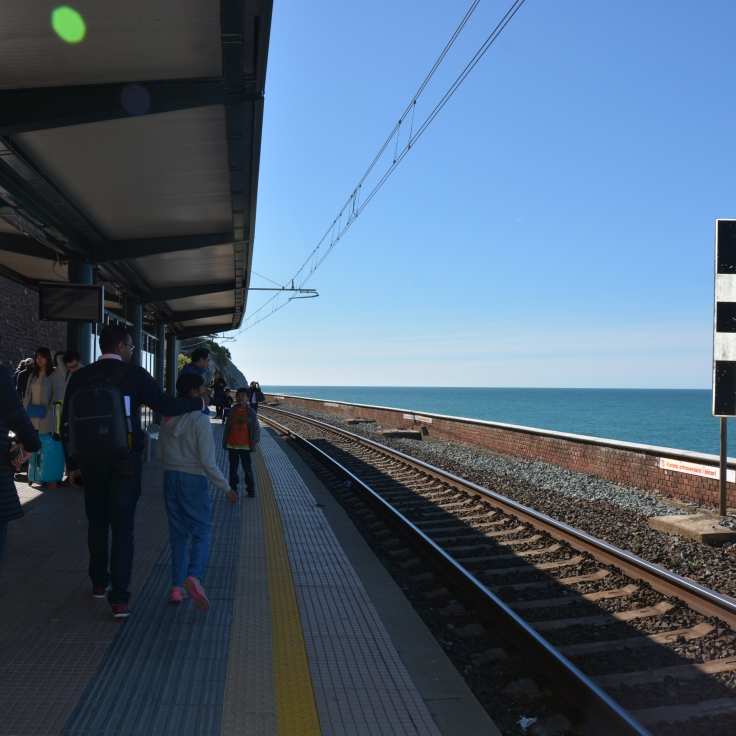 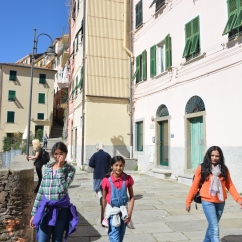 Cobble-stone streets made around the mountain 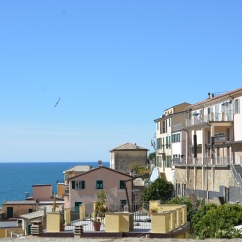 The houses on top of the mountain 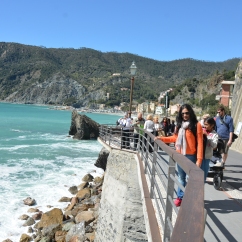 The first village  was Manarola, with a population of 450 people.  We stayed there for half an hour before moving onward to Riomaggiore. At Manarola, getting off the bus, the morning wind was still cold and exploring the little town was second on the list. Almost everybody in the tour group headed straight to the little single cafe for hot Italian coffee and freshly baked croissants. Only after the consumed coffee had warmed our blood, did we venture out to see the sleepy fishing village, where the boats were moored on the roadside instead of cars and the morning high tide caused the waves to  hurl themselves against the cliff . There wasn’t much to see except admire how a community had survived and continues to survive at ease and at peace, away from busy roads, shopping malls and bustling traffic.The locals or should I say the villagers were dressed in trousers, jackets and  suits, a distinct difference from the ‘villagers’ we were used to, in India and  in other developing countries . 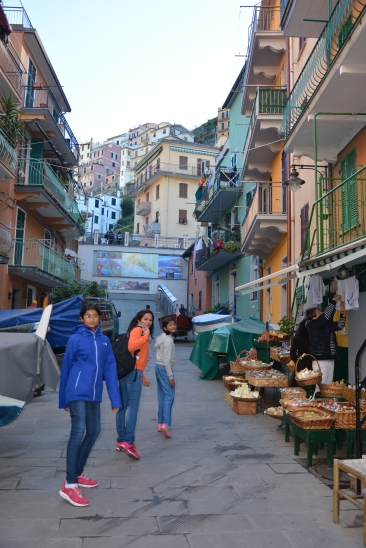 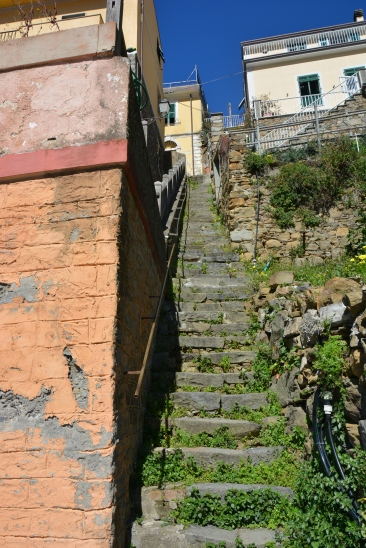 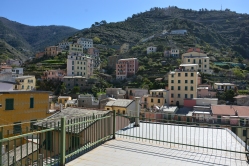 On the mountain- with houses built all over

The little chapel on the way up

The church on the top 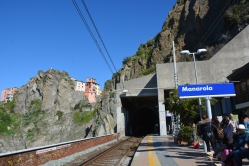 The station- sea on one side, mountain on the other 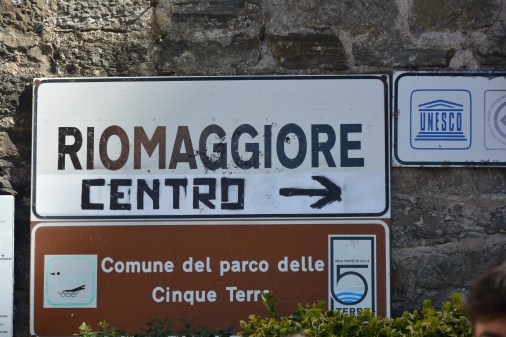 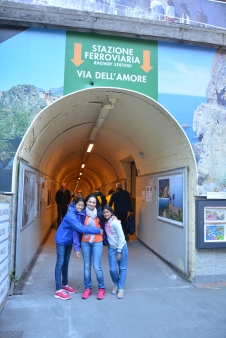 outside the tunnel that leads to the station

Getting into the train, we moved on to Riomaggiore which was way bigger with a population of 1700 people. One winding lane  takes you away from the little station, upwards into the cliff and downwards to the sea; steep steps cut into the cliff lead you to brightly colored homes built at different levels around the cliff, a little chapel set amidst houses in the middle, the Church of San Giovanni on the top and grocery stores in the village below that sell the sweetest oranges. 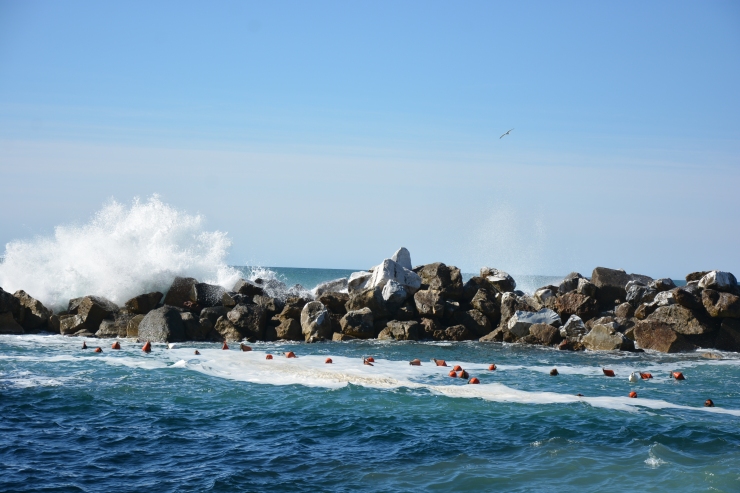 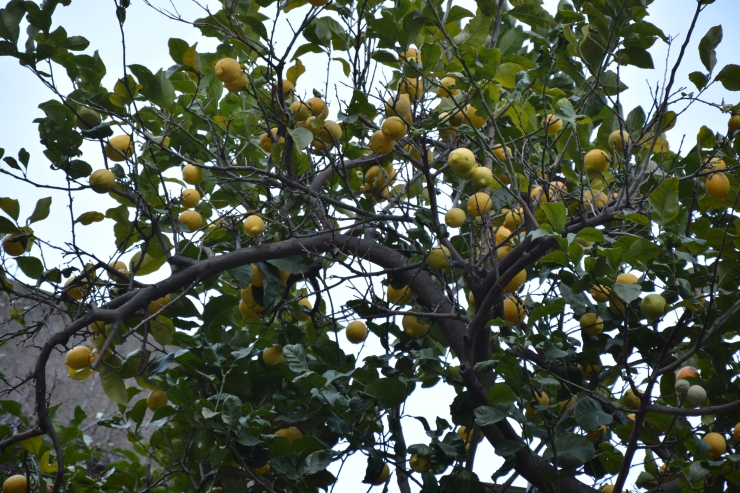 Rugged mountain cliffs, warm sunshine and  emerald green waters defines the Liguria region. The boat ride from Riomaggiore which was part of the trip could not be experienced, as the sea was rough and was best avoided at this time. That gave us 1 and a half hours to explore the cliffs. Colorful houses built haphazardly on the cliff, cultivation of  lemons, olives and grapes, is a nature lover’s delight. The climb up and down the cliff is for those who love a good walk. It’s strenuous but worth every step taken- the mountain air and the climb leaves you feeling energized. The view of the sea from the top, the mountains beyond, the little fishing boats below, is nature and man’s coexistence at it’s best.  A perfect place to escape to … Wasn’t surprised to meet a young author from the United States who had taken up a room on the cliff …(she was kind enough to show us the way back down the cliff to the station, when walking further only seemed like we were going in circles and time to return to the tour group was approaching).

We reached the station at the agreed time. Julio, our guide was waiting with a green flag  The train to the next village was delayed by 15 minutes and we had no choice but to wait at the station  where the sun was blazing hot. After the cold winds, the sun’s warmth was more than welcome but only for a few minutes after which the scorching heat felt like we were being grilled. 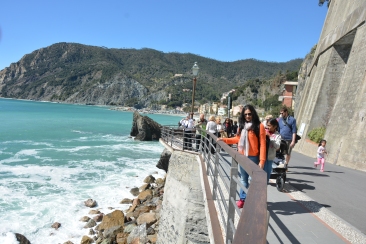 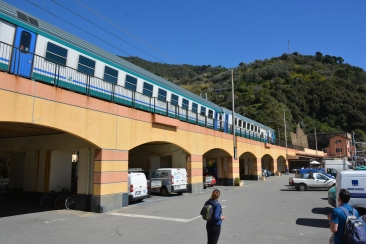 Thankfully the train arrived to take us to the next village, 5 minutes away, Monterosso with a population of 5000 people. One one side of the cliff was the old part of the village and on the other side was the newer part separated by a tunnel. On the new part, a few motor vehicles roamed the streets. This was the most developed village and this is where we were stationed for the next 2 hours for lunch. Monterossa has a small beach . 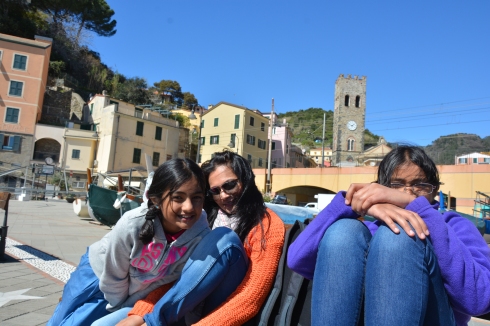 Post-lunch, lazing around before the climb 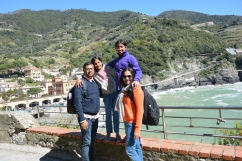 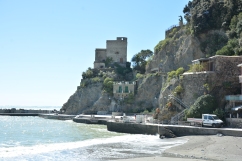 Dawn Tower in the background

Lunch, which was part of the tour was white wine, sea-food salad, pasta in pesto sauce and fruit salad with ice-cream. Post-lunch, we basked in the sun for a little while before going up the mountain to see the cemetery, the church and right on the top was the monastery. 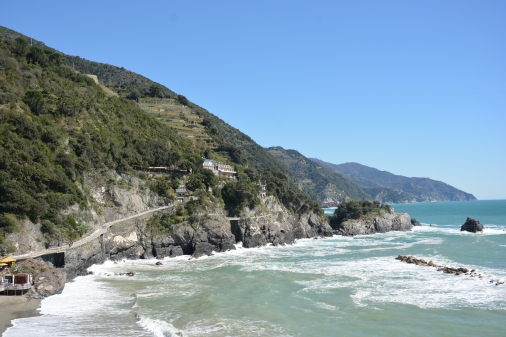 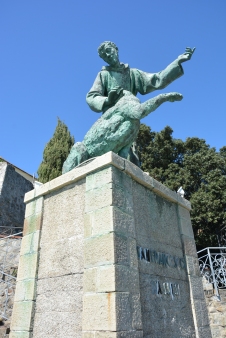 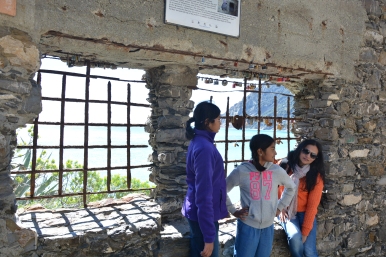 Locks put on the iron bars in the window by lovers 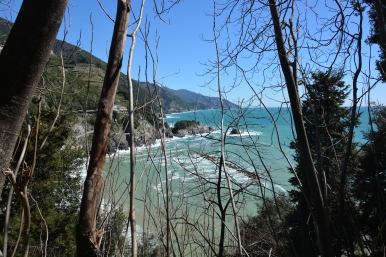 Through the clearing midway to the top 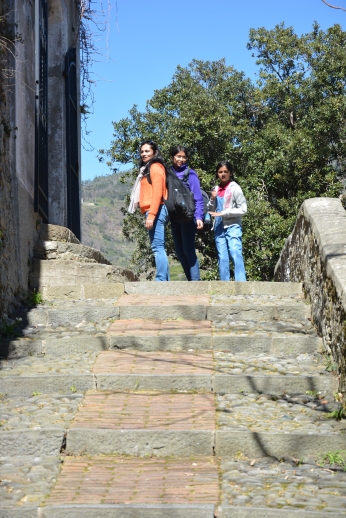 Steps in the mountain that lead you to the top

The cathedral on the top 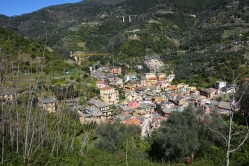 View of the village from the top 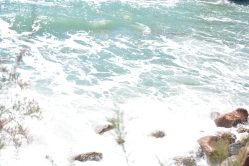 Corniglia, the only village built on top of a mountain  involves a 2 mile climb upwards from the station making it difficult if not impossible to reach, hence was skipped from the tour. All the other villages were built closer to the sea and could be reached easily. Each one similar yet different with a unique beauty of it’s own. 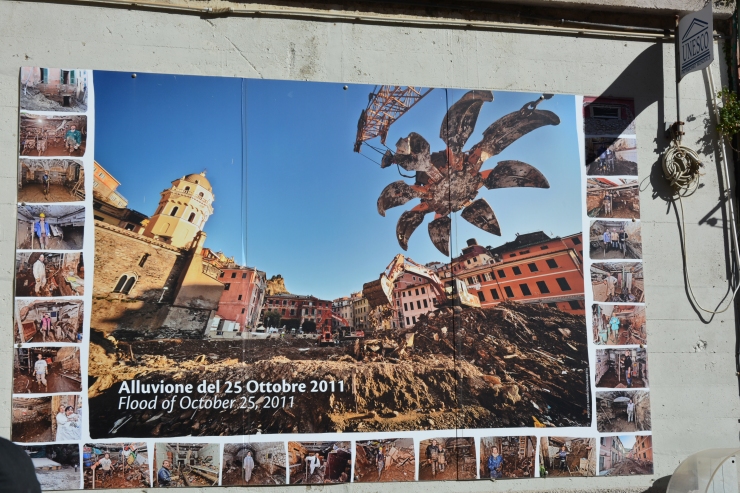 Vernazza, the last village on the itenary has a population of 1000 people. The quaint village had been wiped out during the flash floods of 2011 and remnants of the destruction were still visible. The village was built at the foot of the cliff with a small church at the end of the only road, a little square in front of the church for the residents and lots of shops (lots considering the population size and the size of the village itself, selling artifacts and paintings depicting cinque terra.

The extensive labyrinth of terraced cliffs, winding lanes, green seas, coastal breeze, the small community where everybody knows everybody is a place to lose yourself in, a place to discover, a place if not seen is hard to believe, actually exists.

Visiting Cinque Terra is a must, when you visit Italy, to appreciate the simple pleasures of life. Relaxing, refreshing, romantic…best describes this land.

“.. just south of Portofino, five towns on the Ligurian Sea maintain the charm and character of Italian villages of the past. Monterosso, Vernazza, Corniglia, Manarola and Riomaggiore are the pastel towns that make up Cinque Terre (five lands). They are vintage settlements where life moves in the key of easy — each town clinging to the rocky coast, defying gravity and, most of all, defying time…..”